What is Organoleptic (sensory) Evaluation in Olive Oil

It is an official method for detect, measure and describe the positive and negative characteristics in virgin olive oil*, by using the human senses.
The evaluation is performed by selected, trained and certified team of tasters (tasting panel), with at least eight members.
The method is world-wide accepted and give us the ability to classify a virgin olive oil in one of the following categories** “Extra Virgin”,”Virgin” or “Lampante”

IT IS AN ESSENTIAL QUALITY CRITERION THAT COMPLEMENTS CHEMICAL ANALYSIS***

What is olive oil?

Virgin olive oils (Extra Virgin and Virgin)** are the oils obtained from the fruit of the olive tree (Olea europaea L. ) solely by mechanical or other physical means under conditions, particularly thermal conditions, that do not lead to alterations in the oil, and which have not undergone any treatment other than washing, decantation, centrifugation and filtration*.

Is the only food product today, with legislation of taste (organoleptic profile) that according to the existing legislation is obligatory for dermine it’s quality clasiffication (Extra virgin, Virgin or Lampate) and it’s market value.**

The olive oil produced in an olive mill, is considered “Virgin” due to the mechanical milling or extraction procedure and will be clasified as Extra Virgin, Virgin or Lampante, only after it’s quality evaluation (Organoleptic evaluation and Chemical analysis) **

The application of sensory analysis to olive oil began at the Institute of Fats in Seville, Spain, in the 1970s. In 1981, the IOC decided to launch a study to develop a method, based on internationally recognised standards and methods, to objectively assess the taste and colour defined by the oil denominations.

From 1982 to 1986, experts in sensory analysis and olive oil from six countries developed a method which was then adopted by the IOC in 1987 and introduced into legislation in 1991. The standardisation of organoleptic assessment applied to olive oil is now 32 years old. (MADRID / 09.01.2020)*

The International Olive Council is the world’s only international intergovernmental organization in the field of olive oil and table olives. It was set up it Madrid, Spain, in 1959, under the auspices of the United Nations. It used to be known as the International Olive Oil Council or IOOC until 2006, when its name was changed.
The Council is a decisive player in contributing to the sustainable and responsible development of olive growing and it serves as a world forum for discussing policymaking issues and tackling present and future challenges.

The IOC is committed to the integrated, sustainable development of world olive growing. It attempts to translate this commitment into tangible advancement for its member countries and, most importantly, for the ordinary people who earn their livelihood from the produce of the olive tree.*

The purpose of the international method is to determine the procedure for assessing the organoleptic characteristics of virgin olive oil and to establish the method for its classification on the basis of those characteristics. It also provides indications for optional labelling.

The method described is applicable only to virgin olive oils and to the classification or labelling of such oils according to the intensity of the defects perceived and of the fruitiness, as determined by a group of tasters selected, trained and monitored as a panel.

More are available on the INTERNATIONAL OLIVE COUNCIL website

9.4. Classification of the oil

The oil is graded as follows in line with the median of the defects and the median for the fruity attribute.

The oil is graded by comparing the median value of the defects and the median for the fruity attribute with the reference ranges given below. The error of the method has been taken into account when establishing the limits of these ranges, which are therefore considered to be absolute.

Set of olfactory sensations characteristic of the oil which depends on the variety and comes from sound, fresh olives, either ripe or unripe. It is perceived directly and/or through the back of the nose.

Characteristic primary taste of oil obtained from green olives or olives turning color. It is perceived in the circumvallate papillae on the ‘V’ region of the tongue.

Biting tactile sensation characteristic of oils produced at the start of the crop year, primarily from olives that are still unripe. It can be perceived throughout the whole of the mouth cavity, particularly in the throat. 3.3. Optional terminology for labelling purposes Upon request, the panel leader may certify that the oils which have been assessed comply with the definitions and ranges corresponding to the following adjectives according to the intensity and perception of the attributes.

The labelling of oils as referred to in Article 1(1) shall bear, in clear and indelible lettering, in addition to the description referred to in the first paragraph of this Article, but not necessarily close to it, the following information on the category of oil:

Among the optional indications which may appear on the labelling of oil as referred to in Article 1(1), those laid down in this Article shall comply with the following respective requirements:

In our laboratory, apart from the olive oil sample tasting and classification, we analyses possible defects (if any), so to give the correct instructions to the producer, miller or bottler, on the root cause of defects and how to avoid similar issues in other batches.

They gives us information about the variety of the olives, the farming practices, the level of ripeness of the olives and the extraction procedures in the olive mill along with the conditions of storage.*

* notes of our laboratory 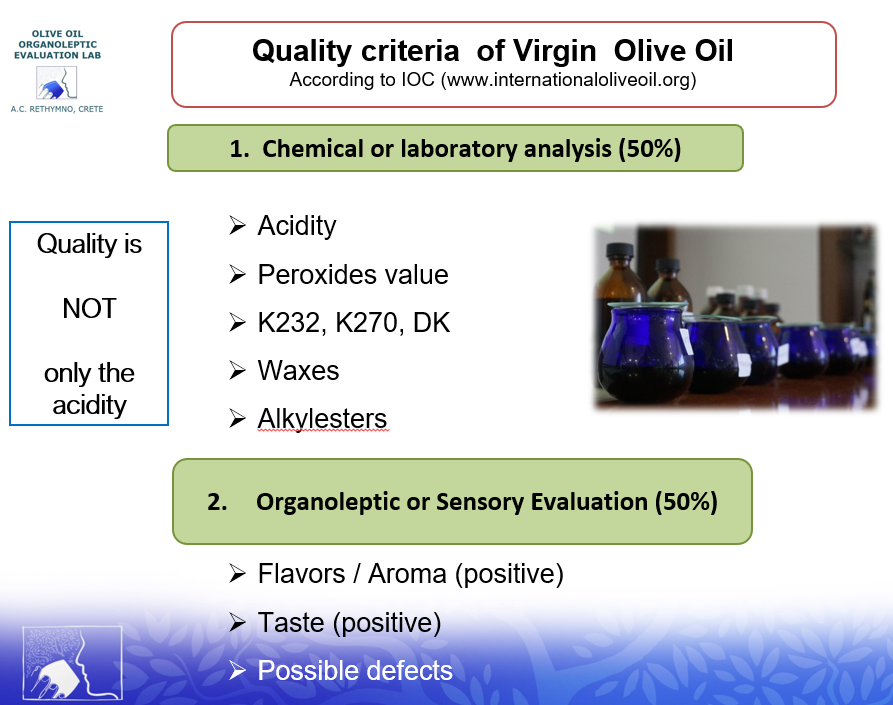 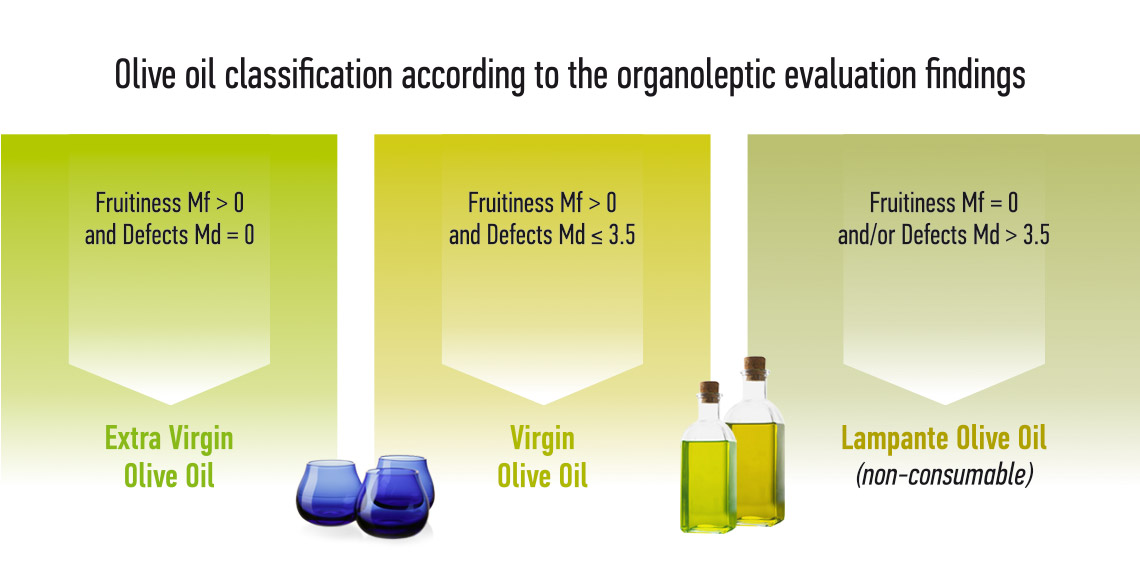 Payments to our laboratory